TURF is an international community of seasoned bloggers, active at various levels in the horse racing industry—as owners, breeders, trainers, professional turf writers and fans. Our primary interest is in exploring and sharing our love for the sport through our individual blogs and via social media outlets, as well as through collaborative endeavors. We stress responsible and ethical writing, often tackling tough or controversial issues, but always encouraging respectful dialogue and offering unique points of view. 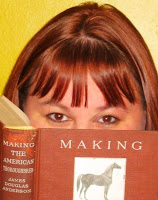 A life-long horse racing fan, Valerie first began blogging in 2007 with a blog named after her childhood racing hero, Foolish Pleasure. In 2009, inspired by today’s great fillies and mares like Black Caviar, Goldikova, Rachel Alexandra and Zenyatta, she created Fillies First. Now a contributing editor at Hello Race Fans!, she has also written original pieces for Raceday 360 and the New York Times' horse racing blog The Rail, as well as for ThoroFan, the National Thoroughbred Racing Association and the Breeders' Cup. An award-winning teacher and tenured associate professor of art history at the University of Pittsburgh at Johnstown, she is currently completing a book entitled Forging the Steel City: How Pittsburgh Industrialists Shaped the City's Skyscrapers. Her next project: a history of horse racing in western Pennsylvania, including a study of now-defunct tracks, racing circuits and breeding farms. To aid in that endeavor, she was awarded a 2012-13 John H. Daniels Fellowship at the National Sporting Library & Museum. 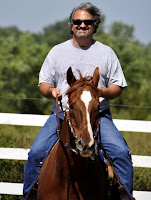 Ted has been a Thoroughbred owner since 2005 and currently runs his own racing partnerships with horses running at Canterbury Park, Remington Park and Tampa Bay Downs.  A freelance writer, Ted covers the Canterbury Park racing season for the Daily Racing Form, contributes to various on-line gaming sites, is a contributing editor to Midwest Thoroughbred Magazine and authors his own blog about his racing experiences and topics that pique his interest. Born in Peabody, MA, Ted cut his racing teeth at the harness and Thoroughbred tracks of New England.  A 1987 graduate of Colby College in Waterville, ME, Ted and his best friend, the late writer Paul J. Mooney, would be known to frequent Lewiston Raceway and once even made a weekend of attending Suffolk Downs, Rockingham Park and Scarborough Downs before returning to classes.  While enrolled at the University of Maryland for a short stint in graduate school, Ted helped pay tuition as a teller at Pimlico and the old Freestate Raceway when both were owned by the legendary DeFrancis Family.  His time in Maryland and Washington D.C. contributed to his near unhealthy attachment to the Preakness Stakes as his favorite Triple Crown race.

Teresa is a high school English teacher and freelance turf writer whose work has appeared in The Saratogian, Thoroughbred Times, the New York Daily News, Daily Racing Form, Trainer magazine, the Rail at the New York Times, The Blood-Horse and BelmontStakes.com.  A contributing editor at Hello Race Fans! and a member of the National Turf Writers’ and Broadcasters Association, she's a member of the board of the Belmont Child Care Association and on the voting panel for Hall of Fame at the National Museum of Racing. A former and erstwhile resident of Saratoga Springs, New York, Teresa has lived in Brooklyn for more than a decade, and when she's not teaching or writing, she's watching the Rangers at the Garden, playing Scrabble, or rescuing cats. 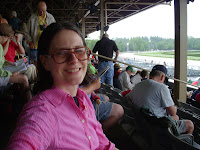 Dana Byerly started blogging in 2007 at Green but Game, not too long after her introduction to racing. In 2008 she formed Hello Race Fans! with one of her best friends, Adam Wiener (aka “Swifty”), who happens to be the person responsible for taking her to the track for the first time. While no longer green and only occasionally game, she's fond of parade plays and tablet capping. Look for her pithy commentary at her current blog Exacta-Mundo. You can also find her Trip Notes updated regularly. It's her hope that Hello Race Fans! can be the digital equivalent of the crazy relative that introduces you to  racing for those not fortunate enough to have one.

Kevin Martin is the owner of Colin's Ghost, a site founded in 2007 that focuses on the history of Thoroughbred racing in the United States.  Colin's Ghost has received praise from such racing luminaries as Steven Crist of the Daily Racing Form and Steve Byk from At the Races.  Articles from Colin's Ghost are featured frequently at the racing content hub Equidaily.  A native of the great state of Delaware, he counts Delaware Park as his home track but also enjoys annual jaunts to Saratoga, Belmont, Aqueduct, Monmouth, Pimlico, and Laurel.  In addition to his work with Colin's Ghost, Kevin has been a contributing editor at Hello Race Fans! since 2010.  In the real world, he is a curator at an historical research library.

Jessica began blogging about horse racing in June 2004. She is a co-founder of Kentucky Confidential, the founder of Raceday 360, and a contributing editor to Hello Race Fans.