Steve Zorn (The Business of Racing) 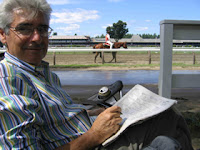 Steve Zorn, a lawyer and law professor in New York, is racing manager of Castle Village Farm, a thoroughbred racing partnership group. He writes the Business of Racing blog and is on the Board of Directors of the New York Thoroughbred Horsemen's Association and the Backstretch Employees Service Team, which provides health care for backstretch workers at NYRA tracks.

Bill Pressey focuses on quantifying thoroughbred performance via objective physiological means, with a focus on what methods and materials can positively impact racing success. His work has been featured in Bloodhorse, Thoroughbred Times, North American Trainer and European Trainer magazines, and the New York Post. On the human side, Mr. Pressey has utilized his B.S. in Exercise Science to consult on the conditioning regimens of several NBA and NFL athletes, as well as an Olympic gold medalist. Trainers and owners in several countries rely on ThoroEdge Equine Performance in an effort to maximize the ability of their racehorses, as well as to identify prospective equine athletes. 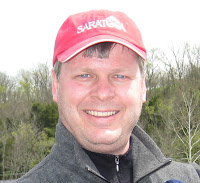 Gene Kershner, a certified public accountant, is a Buffalo-based turf writer who started the EquiSpace blog in April 2008. In October 2010, he became the horse racing correspondent for The Buffalo News and his weekly racing column can be found online in the Sports, Ink blog every Friday. He is on the Board of Directors of the Thoroughbred Racing Fan Association, Inc. (ThoroFan) where he also manages the weekly Handicappers’ Corner. In addition to The News, his work can be found at the Bloodhorse and the NTRA, where he covered the 2009 Breeders’ Cup Dirt Mile at Santa Anita.
Anthony Falbo (The Turk) 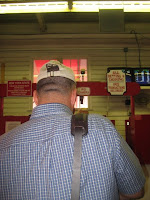 A longtime horse racing fan (and blogger since 2008), The Turk eschews the use of computer programs, sheets of any color, and outside influences in any form (including morning lines and talking heads) when handicapping races, preferring instead the good old-fashioned study of past performances—printed on paper and marked up with a red gel pen. Influenced by Tom Ainslie, Steve Crist and a beloved aunt, The Turk isn’t afraid to put his analysis and opinion on the line and in print. His greatest pleasure: training his apprentice, pre-teen Little Turk, who picked Street Sense in the Kentucky Derby but proved savvy enough to hop on Grasshopper in the Travers. He’s never afraid to skip chalk and bet long—straight talk and bravado free. 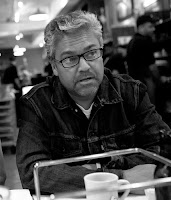 Sid Fernando, a 1982 graduate of Vassar College, is a prominent racing and breeding writer and is president of eMatings LLC and Werk Thoroughbred Consultants, Inc. (eNicks.com). He has been a private pedigree consultant to a select group of international breeders and owners for the last decade. Previously, Sid was bloodstock editor and a columnist for Daily Racing Form, and he has written articles for a number of leading journals and magazines in South America, Asia, Australia, and New Zealand, as well for major publications in the US and Europe, including Thoroughbred Times, Owner-Breeder, Thoroughbred Daily News, North American Trainer and Pacemaker. He blogs about racing, breeding, and youth baseball at Sid-Fernando + Observations, and was a well-known youth baseball coach and manager in New York over the last decade. Sid lives in Brooklyn, New York. 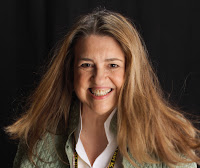 Someone told Fran Jurga that to succeed as a journalist in the horse business she'd need to study horses from the ground up. She took that advice literally, and started with the hoof. Years later, she's built a writing career around feet-first equine journalism and is the go-to resource in the Thoroughbred industry and beyond for everything hoof-ish. Her Hoofcare Publishing projects and ongoing freelance writing for publications and corporate clients span every print and electronic media. The award-winning Hoof Blog has an uncanny way of knowing what's underneath the world's fastest horses--and why. Read Fran Jurga's Hoof Blog and the wide-ranging, freewheeling The Jurga Report for Fran's unique point of view on the world of the Thoroughbred horse.


Alan Mann (Left at the Gate)
With little left to do with his life during the NHL lockout, Alan Mann started writing Left at the Gate in January 2006.  A long-time NY horseplayer who got his start at the harness tracks Roosevelt and Yonkers, he started transitioning to the thoroughbreds in the mid-70's, inspired by Dave Johnson's race calls on the best-selling LP “Secretariat - Horse of the Century," and a hissy cassette recording of Ray Haight's call of Bee Bee Bee winning the 1972 Preakness.  In addition to on-track matters, Alan keeps a close and unforgiving eye on the nonsense transpiring in Albany that has held back the sport in the state for too long....and occasionally mixes in the odd music video and his biased (though totally correct) view of national politics. 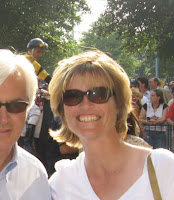 Sue Dalebroux is a busy working mom who discovered on a hot July afternoon in 2003 that horse racing is more fun than laundry. Although a spirited handicapper, she writes trackside commentary in her blog, Post Parade, and has been featured in Texas Thoroughbred. Sue lives in Grapevine, Texas, with her husband, two children, two guinea pigs, an ill-behaved dog, and a well-behaved goldfish. 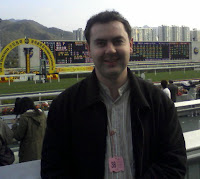 Originally from the UK, Alastair has lived and worked in Seoul for the past seven years: he began writing his blog about Korean horse racing in 2007. He grew up attending the racing at Newmarket and Yarmouth while closely following both European and Asian racing. Away from the track, his sporting passion is K-League Football. He is also a member of the Thoroughbred Bloggers Alliance (TBA).

Gina Rarick is the only American training racehorses in France. A former journalist, she continues to contribute occasional articles to the International Herald Tribune and the New York Times. She is actively introducing French racing to non-French owners and can be contacted through her web site Gallop France. 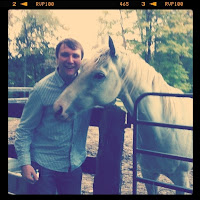 Keith McCalmont is the Media Coordinator for Thoroughbred Racing at Woodbine Racetrack. His daily duties include, but are not limited to, writing feature stories, stakes previews and recaps, and, of course, assisting members of the press with gathering information and contacts for their journalist endeavors. In addition to his daytime gig, Keith is an award-winning, free-lance writer whose work has featured in a variety of horse racing publications including The Saratogian, TROT Magazine, Down The Stretch, Racing Quarterly and Bloodhorse.com to name a few. A longtime horse racing fan, Keith has attended every Queen’s Plate since he was ten years-old when Key To The Moon survived an inquiry from rival Let’s Go Blue. The memories of the 1984 Queen’s Plate inspired McCalmont’s first horse racing piece which was published in Woodbine’s 50th Anniversary magazine. You can follow Keith on Twitter at TripleDeadHeat. 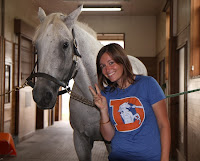 Born in the US, Kate was attracted to racing and Japan at an early age, so combining the two just seemed like the next logical step for her. She has lived in Japan since 2008 and is a contributing photographer to the Blood-Horse, Eclipse SportsWire, and occasionally the Paulick Report. She covers the Breeders Cup and other international racing events for various Japanese racing publications like Futurity Magazine and Yuushun, with the photography company Photostud. Please follow @keiblog on Twitter or on Facebook. Get a glimpse of racing in Japan on her Flickr page. Kate is also a member of the Thoroughbred Bloggers Alliance. 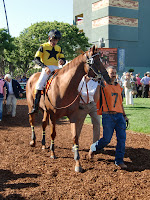 Chris is a lifelong Los Angeles native who isn't afraid of taking a stand. Whether it is selecting the longest shot on the board today or months in advance picking a horse to win a big race, he’s not shy about sharing his “tencents”—no matter how outside the box it might be. Discovering the sport as a teenager, he fell in love with it instantly (and has been blogging about it since March 2010). Detail orientated, he scours through the minutiae to dig up the little things that separate the “good” from the “great” information. A man who prefers to be on-track whenever possible, he loves watching racing live to fully enjoy all the sights, smells and sounds that the track produces.

Frank Vespe made his first mistake twenty or so years ago by attending the races at Saratoga.  He made his second in devouring numerous handicapping books, and his third by suggesting to his then-girlfriend (now-wife) Erin that Laurel Park on a Saturday would be a perfectly good spot to have a date.  Everything that's followed—the racing partnerships he runs under the banner of That's Amore Stable, the walls full of win photos, the battleship-gray lawn jockey awaiting blue and gold paint to match That's Amore's silks, the 2-year-old Swain colt that Erin herself bred, and, of course, the blog in question—came as a result (or the residue) of those three mistakes.  Frank blogs about whatever grabs him—racing in Maryland and the mid-Atlantic, important issues in the sport, the experience of owning racehorses, or sometimes even that annoying guy who prevented him from getting a winning bet down on time.  An active member of the Maryland Racing Media Association who's attended all but two of Preakness runnings since 1994 (as well as several Derbies, and one dismal Belmont that was in no way redeemed when Birdstone inched clear), Frank's been known to get a little overzealous when a horse in his colors slugs it out to the wire.

Frank Mitchell (Bloodstock in the Bluegrass) 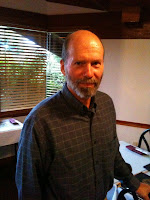 A longtime racing fan, Frank Mitchell moved to Lexington, KY in 1983. There he began editing and writing with The Thoroughbred Record. A quarter-century later, he has published work in virtually every significant Thoroughbred publication in the country. He is author of Racehorse Breeding Theories, as well as the book Great Breeders and Their Methods: The Hancocks. For nearly 15 years, Frank wrote a weekly column for Daily Racing Form called “Sires and Dams” on bloodstock and sales. Currently, Frank fills his blog, Bloodstock in the Bluegrass with his observations about Thoroughbreds and breeding. He is a private consultant on pedigrees, matings, and conformation and is a hands-on caretaker of his own mares and foals at his farm in central Kentucky.